Google+ sucks – suspended for impersonating myself

I used to be a real fan of Google+ but I am being forced to review my position on it. I have had my profile suspended, apparently for impersonating someone. I cannot imagine who that someone is, since my Google+ profile is listed under my own name. 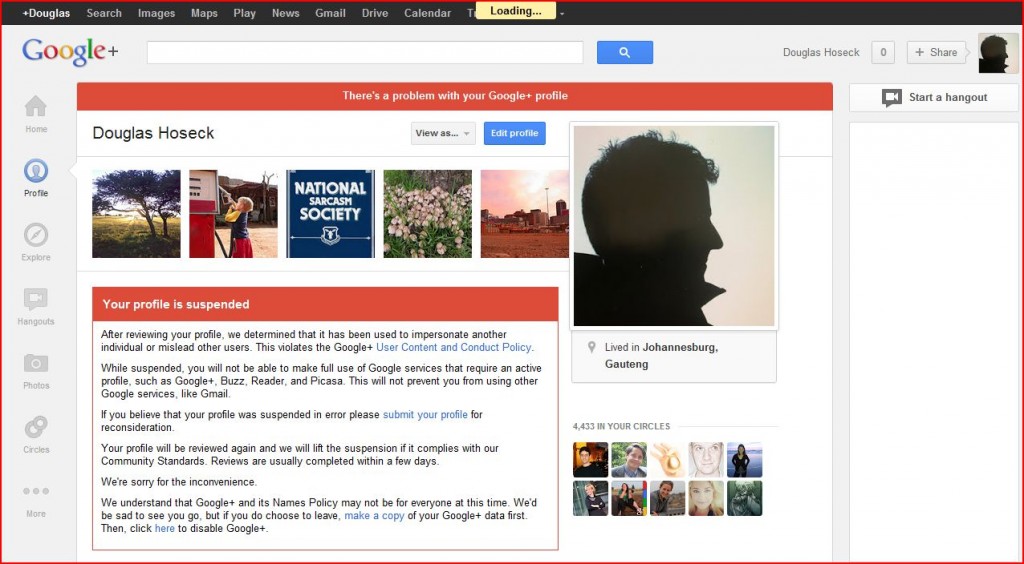 I have submitted my profile for review a number of times & will continue to do so until I get something other than this canned response (which is all I have received from them to date, despite numerous requests for more information):

We’ve investigated your claim. Unfortunately we’re unable to take any further action at this time.

If you have any further questions please consult the Google+ help center at http://www.google.com/support/plus/?hl=en-US&p=help_center

I have received this same, canned response four times now & no further information. And so far I have send them a copy of my ID and my Passport, which both list my name. The same name that is listed on my profile.

I was a fan of Google in general but now have to admit that they are becoming another inscrutable internet conglomeration. No matter how often I have requested more information about this stupid suspension, it is not forthcoming. It seems as though Google is too important to respond to emails from their users!

I have been through their “Names policy” from head to toe & my profile complies with their policy, to the letter. So I cannot imagine why my profile has been suspended. How can you suspend someone for impersonating them self? Seriously Google, shit like this is going to sink your ship. You think you are so big that it is unsinkable, think again. Any company that grows so big that they think they can ignore their users is in for a rude awakening.

I challenge Google to actually come forward and tell me what the fuck is going on here!

Business Tips, Other Stuff, What I do

5 responses to “Google+ sucks – suspended for impersonating myself”