OccupySA – some thoughts from someone who was there

It started in Wall Street & is spreading around the globe. This weekend saw the beginning of the “OccupySA” campaign. Being who I am & believing as I do, I could not miss out on this one. 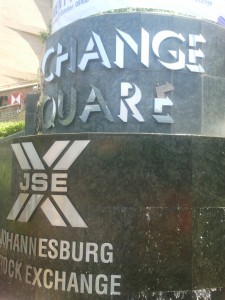 It happened outside the Johannesburg Stock Exchange building whis is called “Exchange square”. BUT as you can see from my pic on the left, if you shoot it from the right place, it says “Change Square”:)

We can all feel it, deep inside; the system is broken. For me, why it is broken and who is to blame, is NOT a concern. All I am interested in is the way forward. What can we start doing to give our children a future? How do we replace the current system without losing what we have? 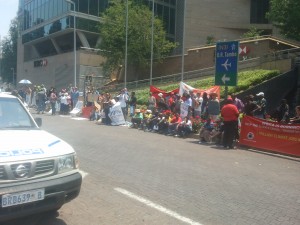 They had a microphone setup and anyone who wanted to, could say anything they wanted to. On the whole, most people stood up and used the mic to project their own agenda. And almost everyone was very good at pointing fingers at who is to blame; this person, that party…whatever. And some, God love em, still thought this was/is a racial issue. They’ll come around. For me, this is NOT a racial issue. It is not religious, cultural or even political. This is a human issue. We need to be aware of our one common, uniting factor: we are ALL humans. Let’s start with that. We all need to start thinking of ourselves as human FIRST! And this fact must guide our thinking.

Amongst the speakers, there were some very good points raised & some great ideas did come out of the “Open mic party”…which is why it is as good a place to start as any.

To take this further it is going to need broader support, so more people need to get involved. We need to stand as humans, as communities, in large numbers, to bring about change. So this first thing is to educate people around us & try to get them involved in bringing about social reform.

A website has been established for this movement: www.occupysa.org

But apparently that’s not the case and it’s all on Facebook now: https://www.facebook.com/occupysa

There you will find info about planned actions & what you can do to participate.

If you are interested in this though, I would suggest you diversify your info sources. Don’t believe one source only. Don’t even believe me. Double & triple check everything you hear on the internet. 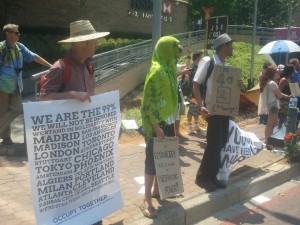 I believe that when we either support or oppose something, we give it energy and therefore substance. So it is important to neither support NOR oppose the current system, simply opt-out of it. Start supporting some of the many, new, growing community initiatives around the globe. Find ways to disengage from the current system and engage with new systems. If we were to all unplug from the current system en-mass, it would dissolve. But this is not going to happen over night, it will be a process. The process has begun, it is inevitable & our future is better for it.

The powers that be

Be suspicious of any solution provided by the powers that be. All their past solutions have proved to be completely self serving.

Be suspicious of any kind of centralized power system. That kind of system can never serve individual communities.

The “powers that be” only have power by our consent. Do NOT fight against them, that is implicit consent. Stop giving your consent. Unplug. Disengage.

Love is the key to the future. I know, sounds fucken trite doesn’t it. Doesn’t mean it’s not true:)

Love yourself. Love the human part of yourself. Think of yourself as human first. Then act with love for the human in you and everyone else on this planet. Let it guide your every action. Love, honor and respect the current systems which have brought us to this point, then unplug and try something new. It’s ok, you are allowed to. In fact, you are allowed to do anything you want to do:) That’s what it means to be human…